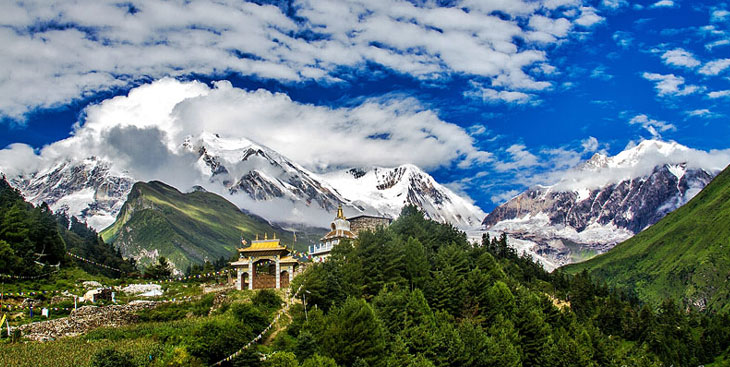 Tsum valley as the area is called, was yet to reap benefits from its immense tourism prospects. The area was opened for group trekking on October 17,2007, but because of lack of information and promotion, the valley was yet reap any benefits from its tourism prospects.Realising this fact, Trekking Agencies’ Association of Nepal (TAAN)in association with Nepal Tourism Board(NTB),Nepal Trust for Nature Conservation(NTNC)and Tsum Welfare Committee(TWC)organized ‘Tsum Valley Exploration’
campaign in May,2008. ‘Tsum’is derived from Tibetan word ‘Tsombo’which means vivid. Traditionally Tsum valley was culturally distinct geographical area called ‘Tsum Tso Chucksums’ which means thirteen provinces ruled as a single territory. The altitude in Tsum valley trek varies from 1905 in Lhokpa to over 593m at Ngula Dhojhyang Pass on the Tibetan border. The valley occupies an area of about 1663sq.km.The Hidden Valley is surrounded by the Baudha Himal and Himal Chuli to the west, Ganesh Himal to the south, and sringi Himal to the Norht.The valley includes two remote VDCs Chhekampar(UpperTsum)and Chumcht(Lower Tsum).Due to its remoteness, the ancient relics still seen.
People in Tsum Valley still practices polyandry system and they have unique culture, tradition and their own dialect. They celebrate unique festival like Lhosar, Dhacyhang, Saka Dawa, Faninig and others. Many Tsumbas(resident of Tsum Valley)report that they have seen or found the signs of Mehti,commonly referred as the ‘Yeti’ or ‘Abominable Snowman’