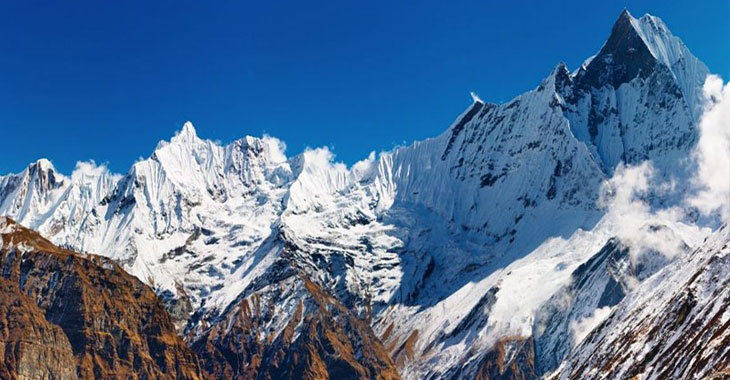 Annapurna is a mountain and part of the Annapurna massif in the Himalayas in north-central Nepal that includes one peak over 8,000 meters (26,000 ft), thirteen peaks over 7,000 meters (23,000 ft), and sixteen more over 6,000 meters (20,000 ft).[3] The massif is 55 kilometers (34 mi) long, and is bounded by the Kali Gandaki Gorge on the west, the Marsyangdi River on the north and east, and by Pokhara Valley on the south. At the western end the massif encloses a high basin called the Annapurna Sanctuary. Annapurna I Main is the tenth highest mountain in the world at 8,091 meters (26,545 ft) above sea level.

Historically, the Annapurna peaks are among the world’s most dangerous mountains to climb, although in more recent history, using only figures from 1990 and after, Kanchenjunga has a higher fatality rate.[4] By March 2012, there had been 191 summit ascents of Annapurna I Main, and 61 climbing fatalities on the mountain.[5] This fatality-to-summit ratio (32%) is the highest of any of the eight-thousandths. In particular, the conquest via the south face is considered, by some, the most difficult of all climbs. In October 2014, at least 39 people were killed as a result of snowstorms and avalanches on and around Annapurna, in Nepal’s worst ever trekking disaster.

Annapurna is a Sanskrit name which literally means “full of food”, but is normally translated as Goddess of the Harvests. According to Devdutt Pattanaik, Annapoorna devi is “… the universal and timeless kitchen-goddess … the mother who feeds. Without her there is starvation, a universal fear: This makes Annapurna a universal goddess … Her most popular shrine is located in Varanasi, on the banks of the Ganges River.” Her association with the giving of food (wealth) led her in time to be transformed into Lakshmi, the Goddess of Wealth..